How Does The Large Farm Irrigate?

Domestic large farms are mainly concentrated in Inner Mongolia and Heilongjiang, with vast land and sparse population, large per capita land area and high land flatness, which has inherent advantages for the formation of farms. With the introduction of land transfer policies in recent years, small-scale land intensification has been promoted, and there are more and more large farms in China. How does this large-area farm irrigate? 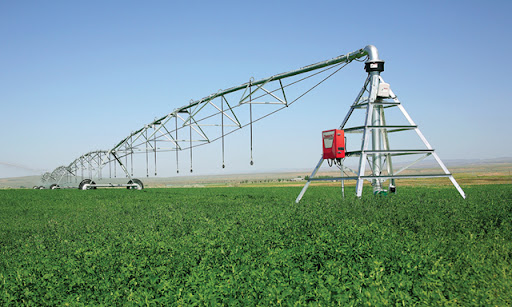 For a 600 meter long central supporting shaft sprinkler, the price of one is about 450000, the irrigation area can be covered is about 1820 mu, the service life is about 20-30 years, and the average annual cost per mu is only 12.3 yuan, which is quite low; The difference is that the initial investment of the central supporting shaft sprinkler irrigation machine is large, and the use benefit is greater and greater with the increase of service life.

Compared with the traditional flood irrigation, sprinkler irrigation machine can realize uniform irrigation without flowing into a river on the ground and a desert on the other side.

⭕The irrigation amount can be adjusted

The water demand of different crops and different growth periods is different. The sprinkler irrigation machine can meet the requirements of irrigation volume differentiation by adjusting the running speed.

The irrigation control system solves the problem of remote control and breaks the space limit of administrators. Administrators can turn on, off and adjust irrigation parameters anytime and anywhere through mobile phones, which truly realizes intelligent irrigation management.

Compared with the Central Branch axis sprinkler with high configuration and intelligent control, the advantage of the irrigation control system is that it can provide more scientific irrigation decision-making based on the measured soil moisture data of the farm; At the same time, provide irrigation effect feedback after irrigation.

Its core and innovation lies in selecting the representative points of each irrigation zone and installing soil moisture sensing equipment to analyze the dynamic water storage of soil and calculate the prediction of crop water consumption; The soil moisture sensing equipment outputs all data to the irrigation control equipment for calculating the appropriate irrigation time and irrigation duration; At the same time, the water pump or solenoid valve control equipment performs decision-making and controls the water pump or solenoid valve for irrigation.

By the way, we are a farm irrigation system wholesaler. If you want to get more product information, welcome to contact us.